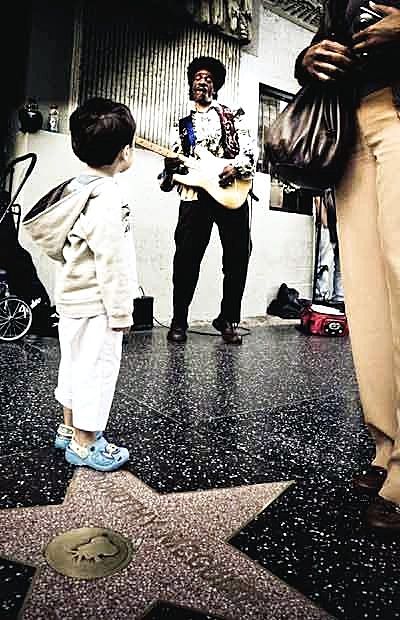 “If you don’t know where you are going any road can take you there”
― Lewis Carroll, Alice in Wonderland
Away from the gaggle of tourist, there is a sweet spot just west of the of Grauman’s Chinese Theatre on the Hollywood Walk of Fame. There Anthony Aquarius pays tribute to Jimi Hendrix as he performs  Jimi’s heartfelt song, The Wind Cries Mary. Busking on weekends, Anthony plays in the late afternoons with the expectation that the power of his music will move the out-of-towners for voluntary donations. Standing before Anthony a small child is taken captive by the power of the song as the currency of notes and lyrics floats off the polished Walk of Fame. Just out of frame Jesus is talking to Alice in WonderLand discussing methods of wooing tourist to have their photo taken with the guise of their character. Motionless, the young child is rooted to the pink terrazzo and bronze star of a bygone era actress Dorothy McGuire as Anthony’s guitar licks echo off the wall behind him and is suspended in time for only a moment. Anthony begins to sing
After all the jacks are in their boxes,
and the clowns have all gone to bed,
you can hear happiness staggering on down the street,
footprints dress in red.
And the wind whispers Mary.
Live on Jimi, live on.