I don’t buy prints from fellow photographers, but while reading the Huffington Post I came across this article titled; 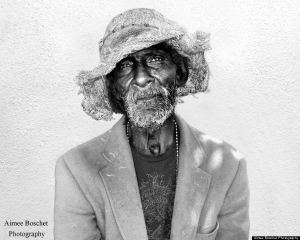 Photo Series Captures The ‘Beauty In Every Line’ On The Faces Of LA’s Homeless. There is no better way to describe my reaction to those images then to say “Impact”. I stopped and gave my full attention to this photographic essay of black and white images named  “The Elders”. Photographer and artist Aimee Boschet had captured the humanity and dignity of homeless people in America. I didn’t just look at Aimee’s work, I studied it, and absorbed  every face. When I came across image number ten of an elderly black man in a straw hat I was gobsmacked.

I ordered that print and it came today. That online image cannot be compared to the 8×10 print that I held in my hands.The elegance and wisdom of this man who life’s journey is written in every line of his face provoked an emotion that  is hard to describe. It wasn’t sadness or pity but connection. In spite of his station in life, this image of grace by Aimee is a reminder that we are all brothers and sisters in this life and that we all have a story to tell. My hat is off to Aimee Boschet who’s essays is not about lost souls in a cruel world but is an embodiment of humanity that reveals their soul, even Aimee’s own soul.
http://www.huffingtonpost.com/2014/07/01/the-elders-photos-los-angeles-homeless_n_5547471.html
FYI:
According to the Institute for the Study of Homelessness and Poverty at the Weingart Center, an estimated 254,000 men, women and children experience homelessness in Los Angeles County during some part of the year and approximately 82,000 people are homeless on any given night. Unaccompanied youth, especially in the Hollywood area, are estimated to make up from 4,800 to 10,000 of these.