Kevin Short, aka West Hollywood Jesus died December 13, 2017, at age 57. Kevin was a mainstay up and down Hollywood Boulevard, and famously posed for pics with countless tourists over the years. He had a positive effect on anyone who came in contact with him. Rest In Peace Kevin.

Life in the City of Angels: Jesus of Hollywood originally posted October, 2009.

It is the Mecca of their religion with 10 million followers annually making the pilgrimage to this sacred site. This is the biggest religion in America. No spiritual following receives more airtime and print space. It is Celebritism. And the holy of holies even has an address: 6925 Hollywood Boulevard, Hollywood, California.There you will find an archeological site full of artifacts – a temple, footprints, hand impressions and a sequence of letters, words and symbols etched in concrete. Beyond the grid of this archeological site is a walk-way that the locals refer to as the “Walk of Fame.”  It is a three-and-a-half-mile (5.6 km) round-trip journey much akin to  the Stations of the Cross in Jerusalem. 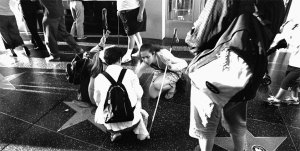 Above the strata is rock art embedded with more than 2,000 stars featuring the names of not only human celebrities but also fictional characters  and even animals. Each emblem is a pink terrazzo five-pointed star rimmed with bronze and inlaid into a charcoal square. Inside it you’ll find a revered name inlaid in bronze, below which is a round emblem indicating the category for which the honoree received the star. Even those of blind faith cherish these artifacts.

The first sacrament dates back to 1960. Who was that lucky first beneficiary?  Paul Newman’s wife, Joanne Woodward. (I don’t care if it rains or blows hard – as long as I’ve seen the star of Joanne Woodward). It was on the Walk of Fame that I found Jesus. He was sitting in Baja Fresh, a popular Mexican fast food chain, deep in conversation with a fellow patron.

Jesus was listening intently while nursing a Starbuck’s Espresso Frapuccino Grande. After finishing his taco – I could only speculate it wasn’t pork – he stepped onto the Walk and I began to follow Him.

Immediately, pilgrims of all nationalities and tongues followed Him with their eyes but none were so bold as to either approach him or engage him, so I decided to take the plunge.“Jesus, are you homeless and forced to work as an historical character here in Hollywood to survive ?” He responded by reaching into his plain linen robe and pulling out a set of keys, “No man” he said, “ I drive a Mercedes and I have an apartment.” Many of the pilgrims would smile at Him and point but it seemed as if only the elderly were captivated by the Son of God and would seek his attention. And, as expected, He would listen patiently.

There were impassioned voices calling from passing cars, “Jesus, Jesus”. But interestingly enough I didn’t hear a peep calling for the attention of the other faux celebrities that congregated at the Temple.

As far as historians can tell, Jesus first appeared on celluloid in 1903, just a few years after the birth of moving pictures.  French brothers Auguste and Louis Lumiere produced “La Vie et la Passion du Jesus Christ,” a 44-minute silent film which was one of the earliest feature-length movie and every frame was painstakingly hand painted for color. Riding high on respectability for over one hundred years the subject of Jesus came crashing down in 2001 with the release of “Jesus Christ Vampire Hunter” – a second coming musical complete with kung-fu action. Need I say more?

Located east of the main temple is a second, smaller shrine on the Walk of Fame. This location is for the most devout believers where for $12.95 you can dwell for hours in worship, adoration and photo opportunities. Eerie wax figures of living and dead celebrity  are dressed up in costumes so that followers can relive their favorite moments of their deity. In April of 2009, Hollywood auction house Profiles in History sold off  “retiring figures.” More than 200 figures were sold online, including the Last Supper and the Beatles. Jesus and His 12 Disciples brought in more than $15,000. The Beatles brought in a mere $13,000. Sorry John, but Jesus is more popular than the Beatles.

Even though Cue The Camels has not officially been released in the US, my friends in the Los Angeles area can now purchase the book at Vroman’s Bookstore in Pasadena. Vroman’s is located at 695 E. Colorado Blvd, Pasadena, CA. 91101, Tel: 626.449.5320

I stopped recording when I reached the crux of the tight squeeze, my progress somewhat hampered by my bubble butt. Handing the camera to Jeremy, I pushed and pulled, finally letting out a loud ‘Aarrgghh!’ as I felt my ass pop like a cork from a champagne bottle when I passed the apex. Finally, I was clear of the aperture. Through into a relatively spacious area, I stood upright for the first time and stretched my back. I gave Dr. Ikram my spiel: ‘Okay, let’s start on this side of the aperture. I’ll start on you, as you explain who, what, where and how. I’ll then pan over to see Mo enter the aperture and follow him through. You continue to describe the tunnel as we make our way to the exit. I’ll continue to roll tape, so don’t stop. If you have to stop, just start from the top of your description, and in post-production we’ll edit snippets of you walking and talking and we can also add in the B-roll footage.’ 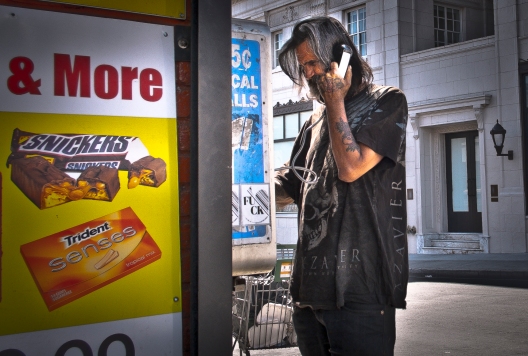 Recalling an era not so long ago, the cha-ching of quarters feeding the public phone, the chirps and tones of buttons dispatching the number you want to call or the interactions with the operator when your minutes are up. As the old pay-phones fade away and disappear from our urban landscape, where in the world is the mild-mannered reporter Clark Kent to dash to change into his Superman tights or where the bad boy can go to call home on Mother’s Day.
Today it is estimated that out of the world’s estimated 7 billion people, 6 billion have access to mobile phones leaving the outdated phone box to a bygone era. What’s interesting is that only 4.5 billion have access to working toilets. That right, more people have cell phones than toilets.
But wait, there’s still life for the old pay-phones. American Mark Thomas started the Payphone Project, by  amassing a database with thousands of public pay phone numbers around the world.  Mark, invites us to  use the old analog pay-phone for out amusement, “I invite people to pick up the phone and call to see who answered and maybe have a laugh.” These phone numbers can be found on his website at: www.payphone-project.com. So, in spite of the pay-phones reputation as a germ repository there are opportunities to “Reach out and touch someone” you maybe just surprised who answers. For those in Hollywood on last count there are 27 pay-phones located on Hollywood Boulevard.

While researching material for my book I came across this old journal entry from a shoot I did in Egypt. This entry will definitely be a chapters of my book, Cue the Camels.

The Great Sphinx of the Giza Plateau on the west bank of the Nile in Egypt.The popular legend is that the nose of the Sphinx of Giza was broken off by a cannonball fired by Napoleon’s soldiers. However, sketches of the Sphinx by the Dane Frederic Louis Norden, made in 1737 and published in 1755, illustrate the Sphinx already without a nose.The Sphinx actually lost a considerable amount of its features in 1378 AD when a local Sufi Sheik thought the Sphinx to be idolatrous and attempted to blow it up with explosives. His name was Sayim al-Dahr. They did much the same thing in Afghanistan with some Buddhist images they did not like.