Seemingly unconscious of my presences there is a moment between silence and mid-note that my lens captures Randy’s silhouette. He rehearses, then pauses to contemplate a melodic and rhythmic pattern – as he continues to rehearse Randy fills the room with waves of invisible sentiment. To the ear its blues, cool, romantic and yet a feeling of expressing pensive sadness. The rehearsal room tuns blue. 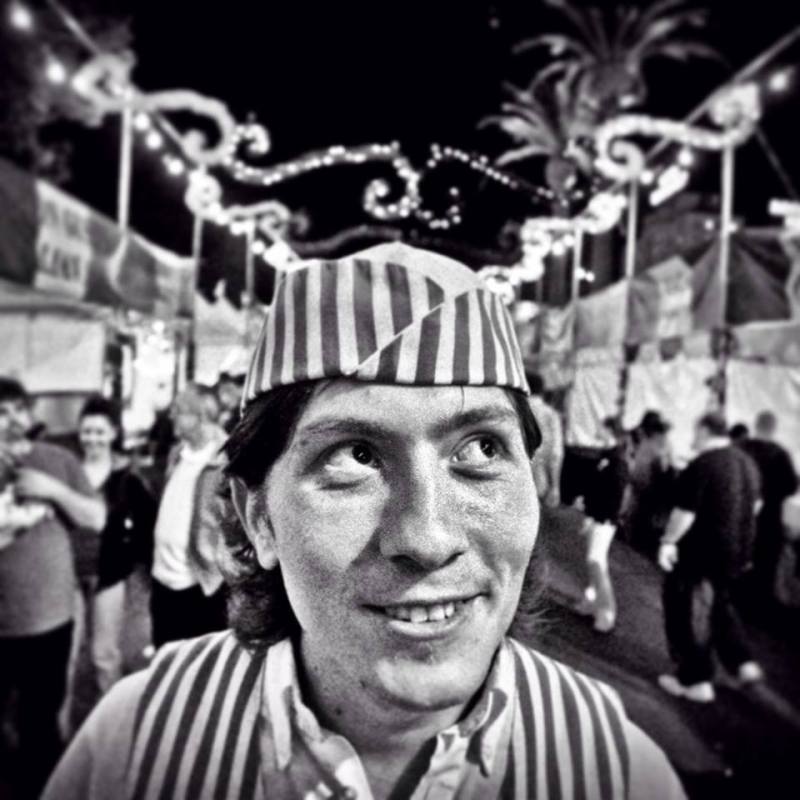 “I’m not sure if it the zest for life that I have or just the carbonation… my friends say that I have a bubbly personality. Oh geez ! People that say you have a bubbly personality… chances are you’re ugly…I don’t think I’m ugly, I have a great smile, a positive attitude and I’m a Gemini. Did you know that we Gemini’s are gentle, affectionate, curious, adaptable, with an ability to learn quickly and exchange ideas, the downside is nervous and indecisive….wait a minute, indecisive…Coca-Cola or Pepsi ? Oh ! it’s not important. The only thing I don’t like about being a soda jerk is the paper hats. I mean they tear easily after you sweat and they never fit right. I don’t throw my paper hat’s away I keep them and make origami zebra’s..you know, the strips on the hat and all…” 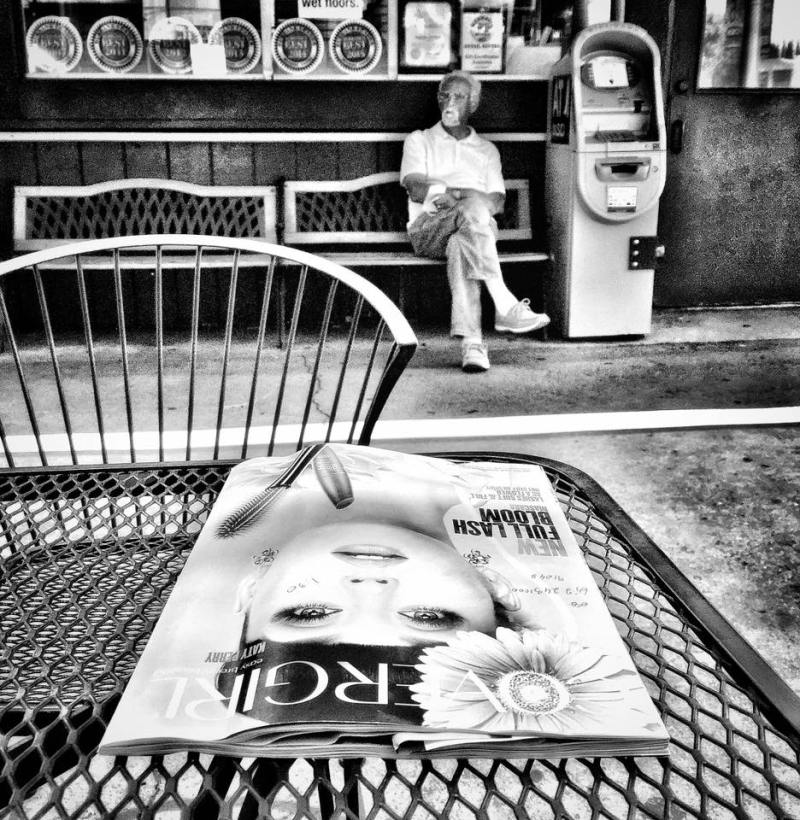 “I don’t have a bucket list, but my shit list is a mile long thought ….God help me! I use to have a religious habit then I became conflicted, confused and couldn’t stop lusting for the church lady playing the piano, besides I don’t like velvet paintings of the Pope. So, let me ask you this question because damn it if money is the root of all evil, why do they ask for it at church and If we were made in the image of God why aren’t we invisible ? “

“Hey man ! It’s all about infinite reflection isn’t it? We ask for an eternal embrace after our rite of passage, but like string theory it’s always about getting the right vibe. The vibe man, the vibration of energy from someone who believes in the third eye… Jesus! I sound so woo woo or stoned. Which reminds me, back in the day I use to watch wonky Dance Fever on tv while stoned….popping Tootsie Rolls and caramel popcorn, man oh man! Maui Wowie! Good shit back then.
Jesus! Dance Fever man, hosted by that baby face and swarthy Adrian what’s his name of T J Hooker and Captain Kirk. “Where no man has gone before.” Oh yeah, been there in the cerebral abysses man, damn near didn’t come back. Got to go man, have a date at Pink’s Hot Dogs, peace brother.”

Architectural photography is not my first choice for an assignment; I’m more of a run-and-gun photographer. But from years of overseas and domestic assignments I came to the realization that the kinetic structure of my knees are deteriorating and the pace of my stride is slowing. I live in my past as most men do my age, but reality is insidious and has a way of redirecting ones life. In a conversation with my brother Mark we discussed reinvention, evolution and acceptance as we age. I’ve witnessed him overcome incredible odds in La La Land (Hollywood) to becoming a very successful Producer while all along maintaining his integrity – which is the cornerstone of character. He now lives in the great Northwest freeing his spirit from the tragic and deviant characters of Hollywood. As T.S. Eliot said,

“We shall not cease from exploring,

And the end of our exploring

Will be to arrive where we started

And know the place for the first time.”

How appropriate, only recently has Mark rediscovered his passions that have lied dormant for several decades. One of which is using his hands to build and create – he is the only man I know who has built a home from the ground up.

So what does all this have to do with Architectural photography? My assignment was to photograph an older building that is being refurbished, redecorated and rehabilitated. While editing the images I suddenly became aware of the building name, Keystone, which is the central stone at the summit of an arch locking the whole together. I think of the camera as my cornerstone, holding my perception of the world together with its steel, plastic and glass.

I have heard that Architecture is like frozen music and is assembled in light that fills an empty space. So, are we architects of our own life? We lay our foundation in youth with education and life experiences as we try desperately to avoid the pitfalls as we whimsically journey to completion. It becomes apparent as we age to measure the space and spiritual dimensions of our past, the games we played and the poetic inventions of our heart. For some of us, we did this without a blueprint and struggled, but quickly learned that for every new situation and issue requires new architecture. Unlike Rip Van Winkle who wakes from the glassy bosom of Ale to find that twenty years have past, I woke to reinventing with a solid foundation to breaking new ground. 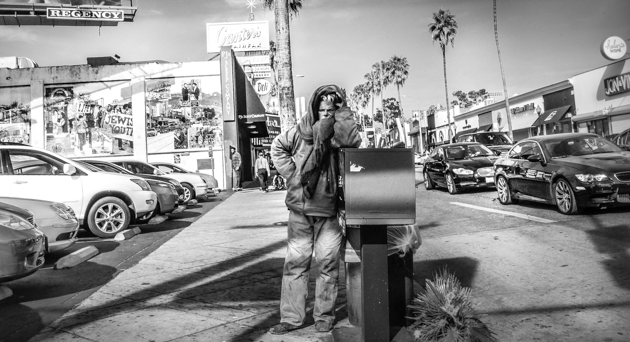 As she posed and continued to smoke she tells me, “I have more than once made contact with the pavement and it wasn’t so gingerly either, the last time was at the corner of Fairfax and Beverly.”
She paused, took the last drag of her cigarette and dropped it on the concrete between her battered boots.
“Strange how the world looks from the ground up, I once saw an ostrich too.” She said
“All well, life has no obligation to give us what we expect.”

Nearby a panhandling broken man with a yellow stained beard shouts,

“Hey! Ain’t no fun when the rabbit got’s the gun” his words sing.

He waves at a woman of the one percent in a Bentley,

“She’s got hairpoo and shinny shins I bet”, his song continues.

Near the corner of McCadden Place and the Boulevard, outside a darken bookstore old school meets new schools. Kool-Aid drinker’s in blue woofing tickets to a falsetto religion.

“Hey man! What did one shepherd say to the other shepherd? Let’s get the flock out of here!”

They’re not amused with furrowed brows as the broken man with the yellow beard passes by.

Sauntering, shuffling along without stepping on a crack… “don’t break your mothers back” he mumbles.

Hey! Mayweather, he’s the coolest, never without his sunglasses. I swear he walks in a Holy Light, a man who could read the hidden messages in a test pattern.

“Nobody works on the Boulevard they only perform; this is their universe with no soundtrack”, He shouts then points.

“Look at that old Filipino face with a sign, he thinks Jesus is for sale.”

Young men nicely dressed selling trips to the hills to see the stars in convertible vans; “Maybe silver ash will bless the pilgrims as they pass” His song carries-on.

A woman wearing paper shoes from the Nail Palace next to the alley is stomping on aluminum cans. Watching is an Armenian man in a gray hat standing at the entrance of Geiger’s Rare Books.

“Oh my, the Pig and Whistle is open, time to cheer the life on Hollywood Boulevard my friend, will you buy? “

After a day of traveling aimlessly along Sunset Boulevard it was time to take a break. It had been a good day of harvesting cigarette butts. Joe had always felt it was his civic duty to help address this serious environmental problem by picking up this toxic waste. Now was the time to sit and enjoy the fruits of his labor. He watched for awhile the congestion of traffic and remembered the time he too lived that life…. but no more. The last few embers glowed at the end of the cigarette as Joe inhaled, and as the white smoke curled up in a spiral motion, he pressed lightly his shirt pocket to the fragment ends of tobacco to insure a reserve till morning. Taking the last drag the ashes glowed brighter and crackled as air passed through the cigarette and the smoke went deeply into his lungs. He dropped the butt on the concrete and stubbed it out in a rhythmical tapping of his right foot. How wonderful it would have been to have a cup of coffee to accompanied his cigarette break he thought. The sun had set, but he had decided to stay sitting on the bench and watch the world drive by and maybe have another cigarette.

I believe that I am trapped in the thoughts of a writer with no way out, I am terrified that at the end of the last chapter my character will no longer exist.I can only hope that the author has a strong vocabulary with very little rewrite. This is my sentence, where I live life on the streets of L.A. – what a crazy story this is going to be. The author writes a word without risk as I am forced to walk the boulevards day in and day out, but I forgive the author. How I have wonder, but am not sure if my story is being revealed to him or if the author has the final say. I can only hope that maybe, just maybe the author will let me know my fate. Esc key, fiction or non-fiction, I just don’t know.

Surveying the plushness of the emporium and its well-designed lighting, all is welcome to procure culinary delights, cold drinks and cigarettes. 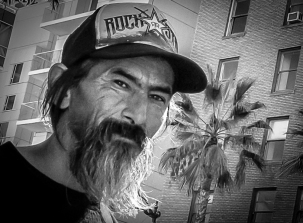 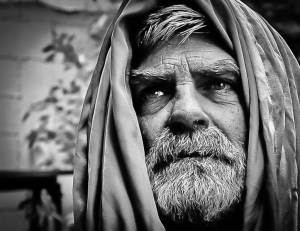